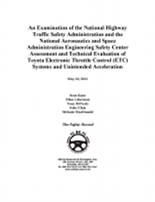 On February 8, Department of Transportation Secretary Ray LaHood released Technical Assessment of Toyota Electronic Throttle Control (ETC) Systems and Technical Support to the National Highway Traffic Safety Administration on the Reported Toyota Motor Corporation Unintended Acceleration Investigation. The two reports, LaHood said, exonerated Toyota’s electronics as the alleged cause of unintended acceleration complaints: “The verdict is in,” LaHood said. “There is no electronic-based cause for unintended, high-speed acceleration in Toyotas.”

The Safety Record’s analysis of the NESC report shows that Toyota’s primary contention in previous government investigations of unintended acceleration is false – there are several scenarios in which engine speed can be increased, RPMs can surge, and the throttle can be opened to various degrees in contradiction to the driver’s command, and not set a Diagnostic Trouble Code (DTC). Among those causes of electronic malfunction in some Toyota vehicles the investigators found were tin whiskers in the Accelerator Pedal Position Sensor (APPS) of potentiometer-type pedals. Tin whiskers are hair-like structures that can cause electrical shorts. The team found the presence of this well-known electronics phenomenon in virtually every potentiometer accelerator pedal assembly inspected – including a vehicle whose pedal was replaced by Toyota following acceleration problems.

The NESC and NHTSA teams did not engage independent engineers with expertise in vehicle engine management design, validation and testing to assist them in evaluating Toyota’s system. Rather, they allowed Toyota to guide this research. In addition, NHTSA relied on Exponent, a science-defense firm specifically retained by Toyota’s counsel for the purpose of defending the company against a class-action lawsuit, to perform an analysis of warranty claims without identifying Exponent as the source of this information. This analysis was used by NHTSA and NESC investigators to dismiss the significant finding of tin whiskers in accelerator pedal sensor circuits causing resistive shorts that can lead to unintended acceleration without triggering fail-safes.  Further, the NESC report is littered with redactions, making it impossible for other scientists to replicate the studies.

“These studies were far from independent. They are the products of Toyota’s involvement and that of the company’s litigation defense experts who provided the statistical analysis that the agencies used to dismiss the physical evidence that showed flaws in Toyota’s electronics,” says SRS President Sean Kane. “Contrary to Secretary Ray LaHood’s pronouncements, the investigations actually showed numerous ways that Toyotas can experience unintended acceleration without alerting the fault detection system. They were simply dismissed as unlikely.”

Finally, The Safety Record challenges NHTSA and NESC’s claim that media hype is responsible for generating a surge of baseless UA reports. An independent statistical analysis shows that prior to any news reports, owners of Camrys equipped with ETCS-i reported UA at significantly greater rates than owners of Camry vehicles without ETCS-i.

“As flawed as the NHTSA and NESC reports are, they tell us a lot about problems with Toyota’s electronic architecture,” Kane said. “They are a valuable starting point. We hope that others will read our report, and build on our observations.”

To download the document linking Exponent to the warranty claims data analysis cited in the NHTSA and NASA reports, click on the thumbnail below. 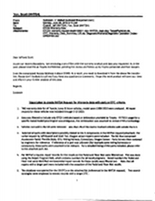