A Guide to Total Hip Implant Failures – Is it a Metal-on-Metal Bearing or Modularity Defect? 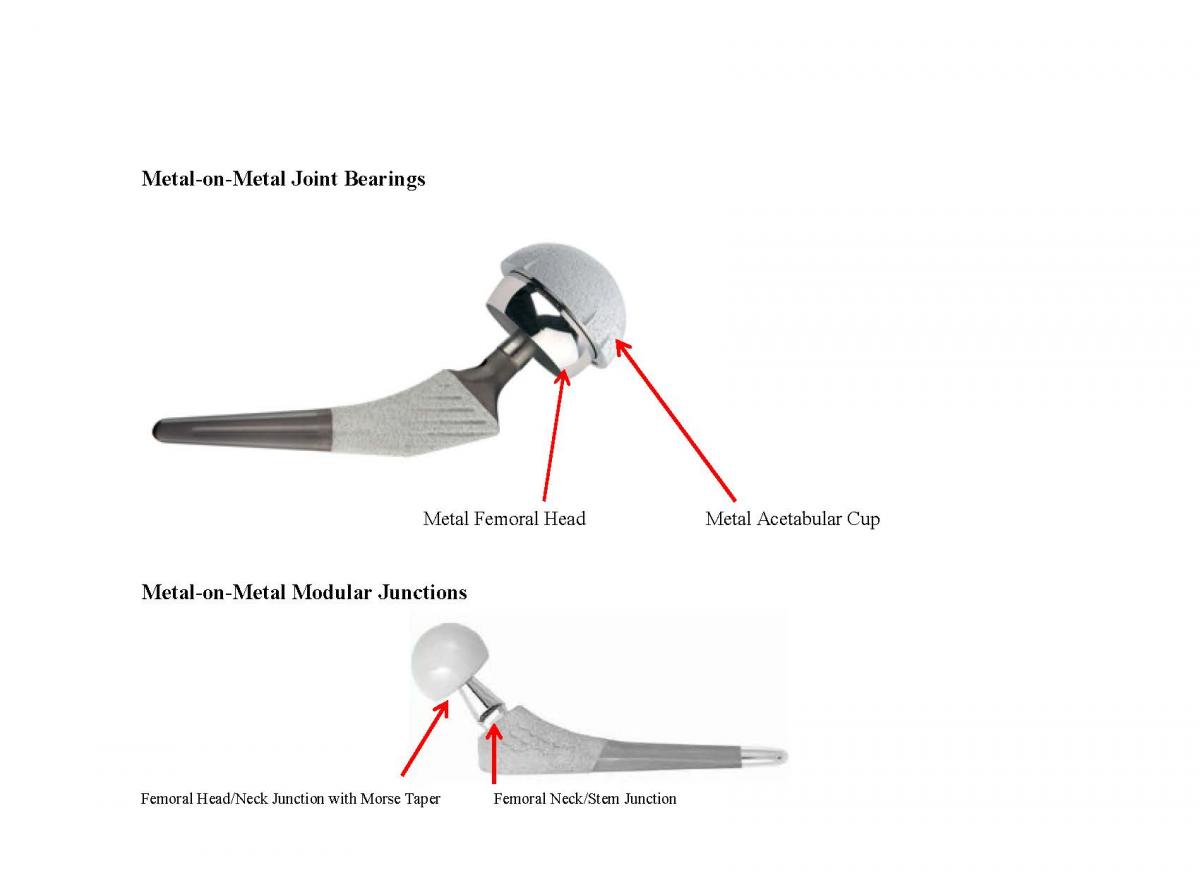 With the many types of hip implant failures occurring today, understanding the specific issues involved in your case is essential to determining how to proceed.  Our overview What’s Wrong with My Hip? explains the differences between the widespread Metal-on-Metal hip implant cases and the growing number of Modular Hip failures. The bio-mechanical problems and adverse health effects related to each are vastly different. Successful case management demands a complete understanding of the various hip revision and replacement systems and their associated design, materials, manufacturing and implanting hazards.
Contact us for an initial evaluation of your Hip Implant failure case or other Medical Product issues. We can identify the relevant issues and prepare a strategy for success.

What’s Wrong With My Hip?

Increasingly, hip revision is becoming a mainstream surgery.
Revisions are normally required when the original components fail at the end of their useful lives.  Most patients are told that their hip joint replacement will have a life span of about ten years.  However, other issues can lead to revision much more quickly, including trauma, surgical error during initial surgery, disease, and poor implant design.  Recently, issues related to poor implant design have been the biggest culprit.
Current Total Hip Replacements consist of three basic components:
Hip Resurfacing implants are somewhat less invasive as they replace the femoral head and the acetabular cup but do not include a full femoral stem, which preserves bone stock for future surgeries.
There are two main design issues causing failure today: Metal-on-Metal Joint Bearings and Metal-on-Metal Modular Junctions. These involve two completely different design failures that can be extremely catastrophic and physically debilitating to the patient. We can show you what to look for to distinguish between these two very different design failures and provide background information that will help you decide how to move forward with your case.

In modern Metal-on-Metal hip implants, the femoral head and acetabular cup liner are made of cobalt and chromium.  These are the joint bearing surfaces. Manufacturers and surgeons have promoted Metal-on-Metal hip implant systems for younger and physically active patients because the metal is more durable than polyethylene and produces less wear debris, as measured by volume.
Contemporary Metal-on-Metal hip replacements in the marketplace today include:
A recent return to Metal-on-Metal (MoM) hip replacement devices, after decades of experimentation with other materials, has brought about a fresh wave of adverse effects necessitating revision surgeries.  The success of these implants is highly dependent on implant design and surgical preciseness. Microscopic metal particles released from the metal components as a result of friction and wear can raise cobalt and chromium levels in the bloodstream, damage and destroy surrounding tissue and can be genotoxic to patients.
Issues
Laboratory studies show that MoM bearings generate 100 times less wear debris, by volume, than the metal-on-polyethylene systems. However, the metal particles are much smaller than polyethylene particles and the number of metal particles was 1,000 times greater than those generated by a polyethylene bearing – even though the total wear, as measured by volume, is typically lower.  These tiny metal debris particles can spread through the body and the bloodstream in the form of metal ions resulting in a range of adverse reactions.
Metallosis or Adverse Local Tissue Reaction are catch-all terms to describe adverse reactions, which can range from effects in the immediate vicinity of the implant to those that affect the entire body.   Metal reactivity, from high wear, causes a foreign-body inflammatory response to excessive metal particles. Metal sensitivity is an allergic response that can occur from normal or high wear. Whether caused by reactivity or sensitivity, the metal particles around the implants can cause serious damage to bone and/or tissue surrounding the implant and joint, and the entire body, including:
Long-term toxicity of MoM is unknown, but doctors have expressed concerns about the exposure to high levels of cobalt and chromium ions and there are numerous reports showing significant effects on organs away from the articulation.  There are isolated case reports on a small number of patients in which high levels of metal ions in the bloodstream may have caused other types of symptoms or illnesses elsewhere in the body, including effects on the heart, nervous system, and thyroid gland.
History
Surgeons pioneered Metal-on-Metal hip replacement as early as the 1950s.  Loosening rates were high and researchers were concerned about the biological reaction to the alloys.  When the first-generation Metal-on-Metal implants were revised, doctors discovered a variety of adverse tissue reactions including a foreign body inflammatory response, osteolysis, and many tissues stained with black debris from the metal particulate.
Ultra High Molecular Weight Polyethylene (UHMWPE) was introduced in the 1960s to alleviate the problem caused by the metal debris.  This material has been used for more than 50 years and is still the most frequently used bearing surface in all total joint replacements, including hip, knee, and shoulder implants.  By 1975, surgeons concerned about the adverse effects of metal particulate began to phase-out Metal-on-Metal systems, and metal-on-polyethylene became the implant of choice. By the end of that decade, there was a widespread perception that the metal-on-polyethylene systems gave better clinical results and this became the preferred route for total hip replacements throughout the 1980s.
The soft-on-hard combinations develop wear on the plastic part of the device generating polyethylene debris which can also cause an adverse reaction in the tissue, so wear remains the biggest problem of this type of total hip arthroplasty.  Eventually, the polyethylene wear particles can cause osteolysis around that implant and lead to the loosening of the cup, the primary reason for revision in the long-term total hip arthroplasty, especially in young and active patients.
In 1988, the metal-on-metal joint bearing hip implants were revived by Sulzer Orthopedics with the Metasul Metal-on-Metal bearing, which is still being used today. The problem of early component loosing seen in the first generation Metal-on-Metal implants was allegedly corrected by improved component design, improved metallurgy, better manufacturing quality,  improved bearing geometry, and a smoother surface finish to promote natural lubrication.  Improved cobalt-chromium alloys such as wrought or cast, high carbon or lower carbon alloys were also developed.  These materials significantly improved laboratory wear rates compared to initial Metal-on-Metal and metal-on-polyethylene bearing surfaces. Since this reintroduction, Metal-on-Metal joint bearing implants have increased, and so have the problems associated with them.
Recalls
Since 2008, three defective hip replacement devices have been recalled, after implantation in some 100,000 patients in the U.S. Since 2008, two manufacturers, DePuy Orthopaedics and Zimmer, have suspended sales of three different MoM devices, after doctors reported high failure rates. The DePuy ASR™ XL Acetabular System and DePuy ASR™ Hip Resurfacing System and the Zimmer Durom® had been implanted in some 100,000 patients before sales were suspended. Nonetheless, complaints to the FDA continue. In 2011, there were thousands. Since 2005, the patients and surgeons have lodged more than 800 complaints involving an unrecalled Metal-on-Metal device, the DePuy Pinnacle System. From 2008 to 2010, those complaints quadrupled. These reports are not surprising given that DePuy sought FDA approval for the recalled ASR system by claiming that its design was substantially similar to the Pinnacle Metal-on-Metal components.

Total hip arthroplasty is one of the most successful surgical procedures dating back to the 1960s using monoblock implants, which incorporate the femoral head, neck and stem as one unit.  However, these designs do not allow for fine tuning leg length, hip angle and lateral offset of the femoral head and therefore require rigorous preoperative planning and meticulous intraoperative adjustment.  Attempts to address the differences in patient anatomy led to the development of modular femoral implants such as the Stryker Rejuvenate Modular Hip System.
Single Modularity vs Dual Modularity
The introduction of the singular modular femoral head-neck junction was the first step in the evolution of modularity.Modularity of the head-neck junction usually is designed with a Morse taper which joins the two components.  The trunnion, or male portion of the taper, compresses the bore, or female portion, as it expands, leading to interlocking of the two components which provides axial and rotational stability.  Smaller tapers and maximizing the head-neck ratio hold the potential for increased range of motion but also increase fretting and corrosion potential and decreased strength at these junctions.  As with any component design, minimizing tolerances and dimensional mismatch reduces relative motion and resultant corrosion.
Issues
Corrosion remains the main issue in the failure of modular implants. It is seen in many implants 40 months post-implantation, but has not been documented in fewer than nine months post-implantation.  This can lead to small metal particulate matter surrounding the implant within the joint space and around the femoral component, causing the same problems as the Metal-on-Metal joint bearing surfaces.
Corrosion at the head-neck taper and the neck-femur taper is caused by multiple mechanisms: crevice corrosion, fretting corrosion, and galvanic corrosion. The presence of a small gap between the two components allows fluid to enter and create Crevice corrosion.  Fretting corrosion can be caused by small-scale movement of the head relative to the neck, the neck to the body, or the proximal body to the distal stem.  Fretting corrosion is a bigger problem with longer necks, however the use of ceramic heads reduce fretting corrosion at the head-neck interface. Galvanic corrosion occurs in any mixed-metal system in which fluid is present, but it is more likely to occur in Ti alloy stems mated to CoCr heads. Galvanic corrosion does not occur at the head/neck junction with ceramic heads because there is no mixed-metal system.
Recalls
While there are several modular hips on the market, the dual modular hip that has seen the most problems is the Stryker Rejuvenate and the Stryker ABG II. In response to numerous adverse reports, Stryker recalled the devices in July 2012 because of the potential for fretting and/or corrosion at or about the modular neck junction.
The 2012 Safety Alert defines the potential hazards as the following:

What Kind of Case Do You Have?

Safety Research and Strategies can review your client’s medical records to determine which of these very different issues are relevant to your case.  Once the problem is identified, we can provide you with the research and background to support the facts and work with you to develop a strategy for a successful resolution.

Auto Safety Whistleblower Program Gets Webpage, But Still No Rules via @whistleblowerNN https://t.co/cbNg1cZt8E

Retweet on TwitterSean Kane Retweeted
26 May

New audit from @USGAO shows that we really don't know whether billions in @USDOT road safety programs are working. Oy vey! @aaronshortstory has the news: https://t.co/1PpsRvLnPO

Hyundai-Kia’s Billion Dollar Engine Problem that Broke the NHTSA Civil Penalty Barrier: The largest civil penalty from NHTSA - The consent agreement was opaque, but the public record is clear. https://t.co/cwsAU80Wfj