Crash prevention is beginning to take center stage in the battle to reduce harm caused by motor vehicle crashes. Following decades of improved crashworthiness (i.e., passive safety), the next largest reduction in deaths and injuries may come in the form of prevention or active safety. 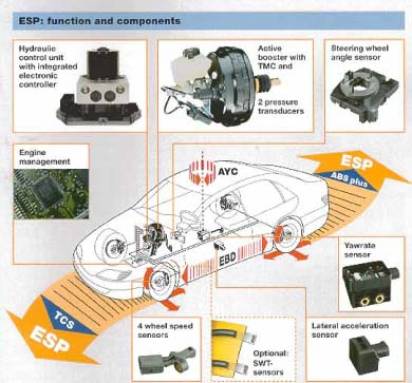 Realizing significant gains in auto safety through crash prevention are now possible as complex electronics become more feasible and robust. One of the most significant advances in crash prevention, which has been on the market since 1995, is Electronic Stability Control (ESC). ESC, known by a host of names like Stabilitrak, Vehicle Stability Program, Electronic Stability Program, etc., work by using ABS brakes as a foundation and with the addition of sensors measure steering wheel angle, yaw rate, acceleration and turning force. Software algorithms interpret the sensor data and determine whether the vehicle is traveling the way it should given the driver input. If not, the system automatically activates the brakes on one or more wheels or activates the throttle slightly to bring the car back in line. Analysis of recent real-world data shows significant reductions in single car crashes for vehicles with ESC.
Electronic Stability Control: Update
Continental-Teves ESP System Components
Electronics Merge Active and Passive Safety
The auto industry is currently melding active and passive safety systems together in new ways in order to improve overall safety.  Traditionally, active and passive safety remained separate-no longer.  Active systems are beginning to control passive safety features, as modern electronics allow more sophisticated, reliable, and cost-effective integration.
Today’s safety systems use a network of advanced sensors, electronic control units and electro-mechanical actuators.  The most prevalent crash avoidance feature include Electronic Stability Control (ESC), Active Suspensions, and more recently, Lane Departure Warning Systems, Night Vision, and Adaptive Cruise Control (ACC).  Other traditional vehicle systems are transitioning from mechanical systems to electronically controlled designs, known as “X  by wire.” The systems undergoing transition include throttle, steering, braking, electronic parking brakes and suspensions.
The first significant convergence of active and passive systems was introduced in 2002 on the 2003 model Mercedes-Benz S-Class.  Known as PreSafe, Mercedes combined already in use hazard-detection technology with new types of seatbelt tensioners (non-pyrotechnic, reversible) and automatically adjusting seats and windows.  Mercedes’ system works in phases.  First, sensors monitor vehicle behavior and send a warning light to the driver when limits are reached.  When critical situations are detected systems like Electronic Stability Control (ESC) intervene to improve vehicle control (assistance phase).  If vehicle sensors detect the possibility of a crash, various safety systems are engaged to prepare and manage forces in a collision.  In the Mercedes PreSafe phase, front and rear seats are positioned to minimize submarining and position occupants’ upright, belts are tensioned with reversible tensioning devices, knee bolsters are extended, and windows are automatically closed to eliminate open portals.  Mercedes engineer Karl-Heinz Baumann is widely recognized for his role in the concept and application of the melding of active and passive safety that resulted in the development of Pre Safe.  Baumann was also responsible for the automatic roll-over protection in the 1990 Mercedes SL.
Suppliers are now marketing systems similar to PreSafe.  Continental-Temic’s system, called “Active Passive Integration Approach is controlled by a “Danger Control Module” that is designed to recognize potential crashes and activates staged measures to control the vehicle and occupants.  Similar to Mercedes, the APIA design integrates sub-systems that are already in production.  Denso’s Pre-Collision System operates in a similar fashion using a radar sensor, pre-collision electronic control unit and seatbelt ECU to automatically tighten belts if an impending crash is detected.
Questions about managing these increasingly complex systems, while maintaining affordability, and reliability were at the forefront of Convergence 2004.  This is leading to attempts to standardized interfaces between the various subsystems and has spawned industry cooperation like AUTOSAR (Automotive Open System Architecture), an industry initiative intended to establish standardized vehicle applications for non-competitive software.  The goal is to enable suppliers to produce standardized Electronic Control Units (ECU) that can be used by multiple manufacturers.  The infiltration of electronics has resulted in an average of 50 unique ECUs in the average car.  By 2010 the electrical/electronics content is expected to account for 40 percent of vehicle components.  AUTOSAR members aim to have systems on the market by 2008.  A significant area of cost savings that is being targeted by AUTOSAR is warranty and defect costs.
Robert Bosch, one of the largest suppliers, and a leader in the AUTOSAR coalition, believes that the cooperative effort will reduce the probability of the current quality problems that have resulted in increased recalls and warranty costs.

It’s been 4 years since NHTSA released a Non-Traffic incident analysis, which includes an estimate of the annual rollaway injury and deaths. The newest numbers are out. Takeaway: Rollaway is pretty much the same threat to public safety it’s always been. https://t.co/aIaw4Gj1Az