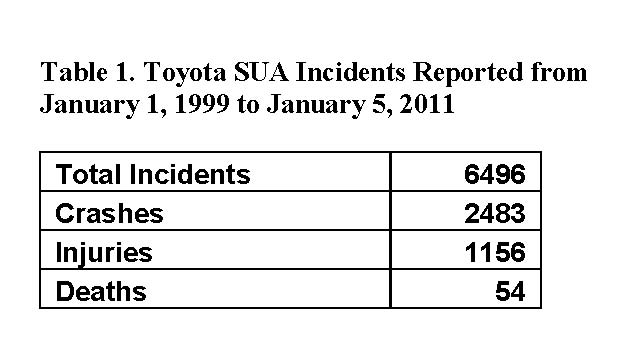 Safety Research & Strategies has completed our latest review of Toyota unintended acceleration complaint data, and they confirm that Toyota owners are still reporting SUA incidents – even those who had taken their vehicles in for the recall repairs.

Our database consists of incidents from the following sources:

– Consumer complaints to NHTSA through January 5, 2011

– Consumer contacts made to our organization and others that are reporting incidents that they have received.

Every effort has been made to identify duplicate records and combine them.  However, often the reports do not provide enough detail to link incidents to other reports.  There are likely some duplicates among our records – if there are, they are few.

SRS’s database consists only of incidents reported from 1999 to the present (regardless of model year).  We have defined unintended acceleration as any incident in which the complainant reported an engine acceleration that was unintended – regardless of whether the car was in gear.  We understand that this is a broader inclusion than others have considered; however, it is important to review these in context of identifying trends.

Note that the incidents we are reporting only represent those that are in the public realm.  According to the House Committee on Energy and Commerce, Subcommittee on Oversight and Investigations, in response to the Committee’s January 28, 2010, request for Toyota internal documents, Toyota produced a representative sample from a larger set of claims.  The Committee noted that 37,900 customer contact reports were identified by the company as “potentially related to sudden unintended acceleration.”

We should note that we have taken a very conservative approach to the fatality count.  It is based on an assessment of the incident reports and represents deaths potentially related to unintended acceleration. In order to be included in the fatality count of 54 (up from 48 last reported by SRS on October 25, 2010), there must be surviving passengers from or witnesses to the crash, or investigations of the incident must have ruled out any medical conditions or crash characteristics that would have likely contributed to the incident and/or concluded that the crash was the result of a defect related to SUA. Incidents that are noted as simply loss of vehicle control or unexplained single vehicle crashes with no indication that a UA event occurred have not been included in this count. These criteria were used in our October 25 analyses, but are modified from our previous examinations, and are intended to provide as accurate a fatality count as possible. However, it is important to acknowledge that some incidents not included in this count are still potentially relevant to SUA. 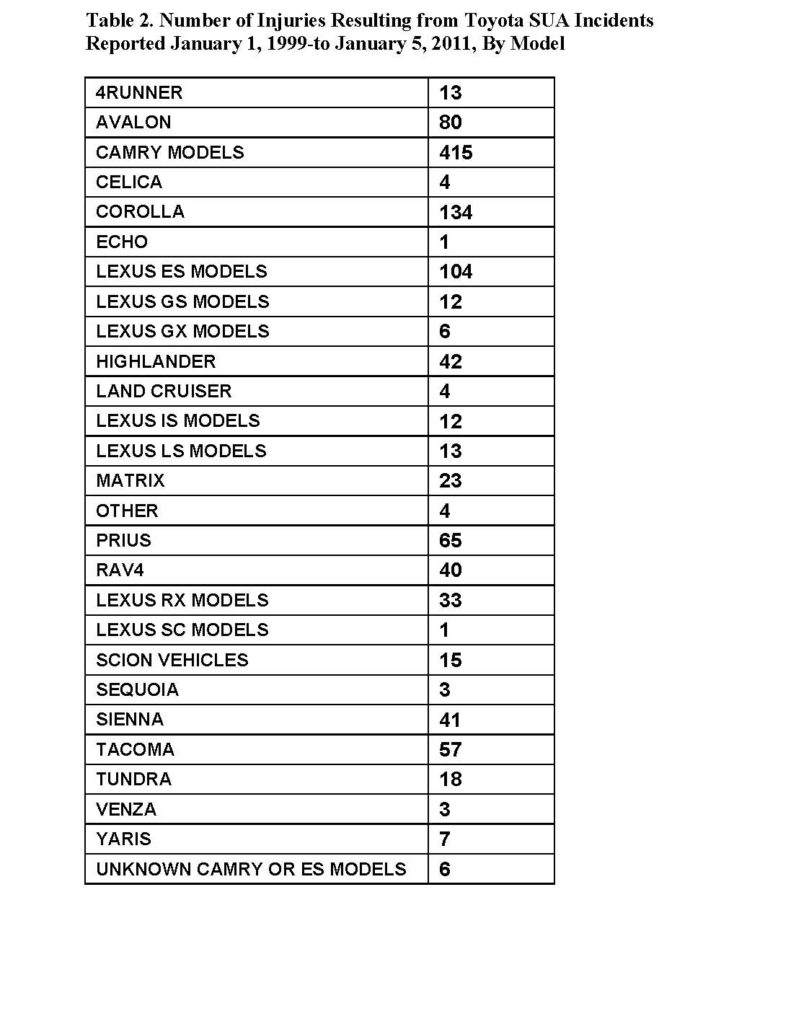 It should be noted that from January 1, 1999, to January 5, 2011 an additional 82 crashes were reported, resulting in an additional 70 injuries and 98 deaths that have been excluded from our tally. These additional incidents represent crashes that speculate SUA; primarily these are crashes for which there are no witnesses or surviving passengers, or incidents that have not yet been investigated thoroughly. 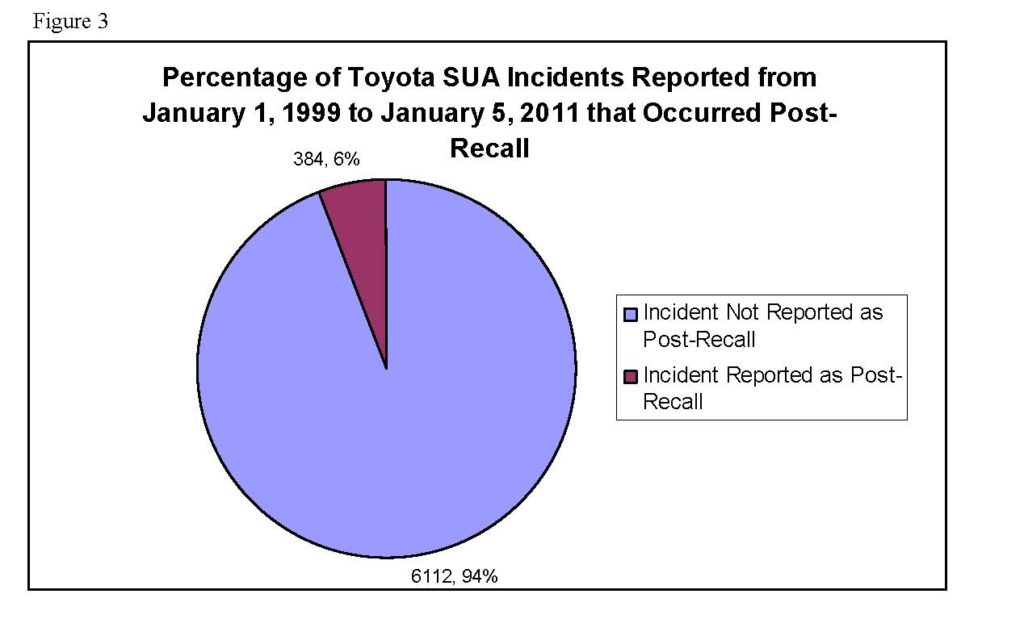 Recent reports have highlighted the drop in reported SUA events in Toyota vehicles during the second half of 2010. To examine this decrease in reported events, it is important to consider the factors that contributed to an increase in reporting in November 2009 and February 2010, and to examine the characteristics of the incidents that were reported during that time.

To gain insight into the decline in reported incidents, SRS examined a subsample of the data used in the analysis above. Specifically, SRS examined the relationship between date of report and date of incident in 5,547 consumer complaints to NHTSA, for which the agency had coded a precise incident date.

The figure below provides a breakdown of number of incidents, by calendar year of incident and calendar year reported, for complaints reported from 2004 to 2011. There is a clear increase in reporting in 2009 and 2010. What is notable about the reports in 2010 is how many involve incidents occurring in previous years. 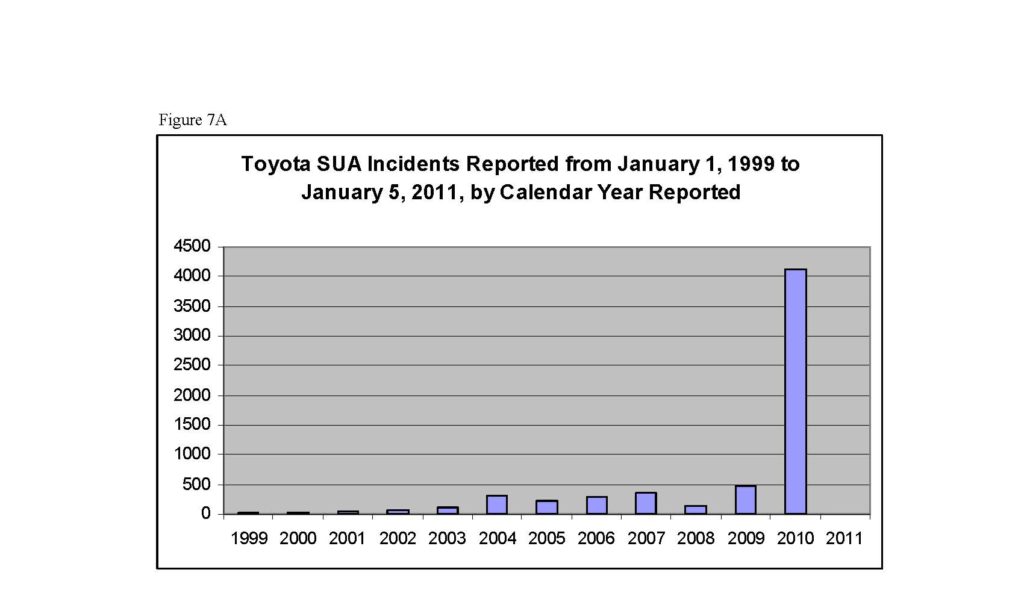 The next figure illustrates the number of incidents, by calendar year of incident and month reported, for complaints reported in 2009 through 2011. Note that a large number of complaints submitted in February and March 2010 are incidents that occurred in previous years. 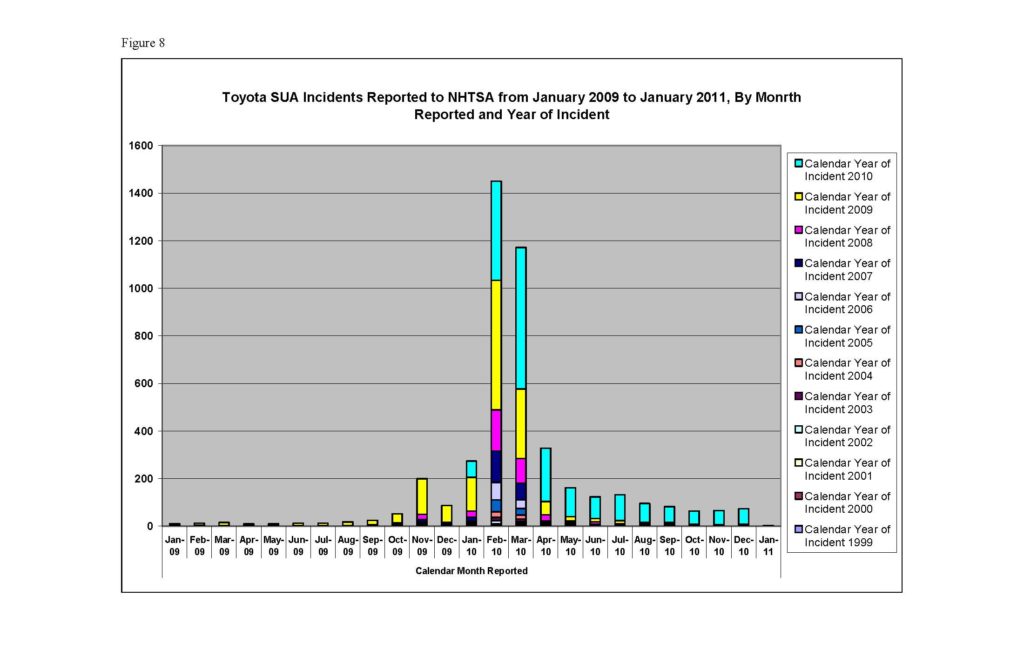 This demonstrates the effect of the media and NHTSA announcements of defect investigations on reporting. Rather than dismiss this media effect as creating events that otherwise wouldn’t exist, it is valuable to consider why reporting is so influenced by media reports, and why previous incidents went unreported prior to SUA media coverage. It seems likely that, without the media coverage about SUA, some consumers would never have heard about NHTSA’s consumer complaint hotline or NHTSA’s online systems for complaint intake or would not have known how to reach either. Compounding that factor is the dismissal of SUA claims by Toyota at the dealership and corporate levels.

Further, long before Toyota Unintended Acceleration problems were a staple of daily news headlines, SUA complaints among Toyota vehicles with Electronic Throttle Controls were significantly greater than among Toyota vehicles without ETC, according to a scientific analysis from Quality Control Systems Corp. (QCS).  (see “What NHTSA’s Data Can Tell Us about Unintended Acceleration and Electronic Throttle Control Systems” Oct. 11, 2010)

QSC released its first analysis in February 2010 (see “Electronic Throttle Control Systems In Toyota Consumer Complaints to NHTSA” Feb. 3, 2010) and presented it with new data in October to the National Academy of Sciences panel studying unintended acceleration. QSC tested the hypothesis that there is no indication of a throttle or electronic control system malfunction in Toyota models, recalled or not, in the NHTSA complaint data. The authors, Randy and Alice Whitfield, deliberately excluded complaints reported to the agency after the highly publicized August 2009 Saylor crash, which killed all four occupants in Santee, CA.

Toyota has insisted that there is no reason to believe that there could be an electronic cause of these sudden acceleration events.  However, QCS’ analysis finds that the proportion of consumer complaints related to vehicle speed control in the Toyota models studied – Camry, Tacoma, and Lexus ES – vehicles is substantially higher in those models with Toyota’s ETC system than it is for the same models without it.  The report also finds the proportion of reported speed control failures among complaints in the non-recalled Toyota Camry vehicles with ETC compared to the recalled Camry vehicles with ETC particularly troubling.

In the NAS presentation, Whitfield also examined the effect of publicity at various points that coincided with NHTSA investigations before the Saylor event.  For each of the vehicles studied, non-recalled vehicles with electronic throttle control show SUA complaint rates that are greater than those same vehicles without it.  The difference was statistically significant for the Toyota Camry and the Toyota Tacoma.

The February QCS report was supplemented by the new NAS presentation in a number of ways. Instead of relying strictly on the component coding of speed control related complaints, the narratives of the complaints were searched for key words and phrases indicative of unintended acceleration. The new analysis controlled for years in service by limiting the data to complaints about vehicles in the first calendar year after the production model year. Total numbers of unintended acceleration complaints were normalized based on vehicle production numbers reported by Toyota to NHTSA.  The data were not restricted to complaints with decodable VINs, and certain assumptions were used about engine design (with and without ETC) based on documents produced by Toyota to Congress for its investigation.  Like the February analysis, the new one was restricted for the period prior to the Saylor crash.

The QCS presentation acknowledges that floor mat interference, sticky gas pedals, and driver error have played a role in some sudden acceleration events involving Toyota vehicles. This is based on the fact that some of the complaints frankly state owners’ opinions that these were causes for some of the incidents.  However, many other owners’ reports were adamant that these were not the causes of the unintended acceleration events, for example, in vehicles in which floor mats had been removed.  Since Whitfield looked at the effect of electronic control systems separately by model, he believes that electronic throttle control systems likely explain the disparity in complaint rates for the three models studied, to the extent that driver, environmental, and other vehicle-related effects can be ruled out by the study’s design.