Will Chrysler stand behind the Jeep? 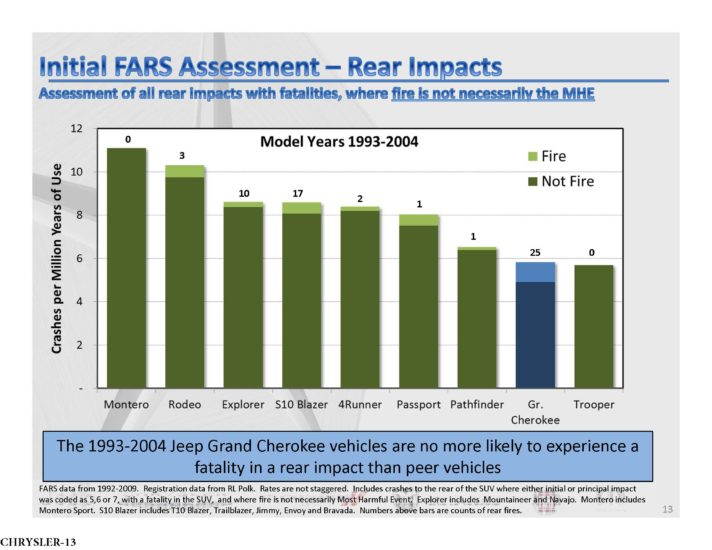 We will not speculate. We have, however, hired Randy Whitfield of Quality Control Systems Corporation to see if he could replicate Chrysler’s first – and less favorable, albeit more accurate – method of comparison of fire-related, fatal rear-impact crashes.

During NHTSA Preliminary Evaluation 10-031, Chrysler tried to make its statistical case in a nifty Power Point presentation that compared the fire, fatality and rear-impact incidence rates – diced into a variety of different slices – among nine peer SUVs from the 1993-2004 model years. (Toyota 4Runner, Ford Explorer, Nissan Pathfinder, Chevrolet Blazer, Mitsubishi Montero, Isuzu Rodeo, and Isuzu Trooper.) After NHTSA made its recall request, Chrysler released a “White Paper” comparison chart that changed the population from the actual peer group, to a much larger universe of “comparable” vehicles such as the Corvette, ToyotaMR2, and Mazda RX7 among others.

We asked Whitfield to replicate the data Chrysler used to create Slide 13 from its April 11, 2011 presentation to NHTSA (below), which is an assessment of all rear impacts with fatalities. Chrysler broke each bar into fire and non-fire-related crashes. The smaller portion of the bar represents the fire-related fatal incidents, and the number atop each bar is an expression of the fatal, rear-impact, fire-related crashes.

Chrysler gathered these numbers and concluded: “The 1993‐2004 Jeep Grand Cherokee vehicles are no more likely to experience a fatality in a rear impact than peer vehicles.”

Whitfield abstracted data directly from FARS and determined the makes, series, and model years of these crash-involved vehicles using the VINs. He refined the population a bit based on counts and rates using production figures cited in Chrysler’s presentation and EWR summaries. For example, he determined that Chrysler’s count of the “Ford Explorer” did not likely include the Ford Explorer Sport (2-door, model years 2001, 2002, and 2003).

“Based on these judgments, and in every case, our count of rear impact fatal crashes involving fires precisely matched that shown for each individual vehicle series (or series grouping) on Chrysler’s Slide 13. From our crash count, and from crash rates interpolated from Slide 13 of Chrysler’s presentation, we estimated the registered vehicle years accumulated for each vehicle series (or vehicle grouping). Lastly, we calculated the crash rates per 10,000,000 registered vehicle years of estimated exposure.”

Whitfield kindly calculated the rates and found that the Jeep Grand Cherokee topped out at 9.2, while its closest competitor, the Isuzu Rodeo, claimed a 5.8. Of course, the latter likely represents a smaller fleet, which tends to distort the comparison. 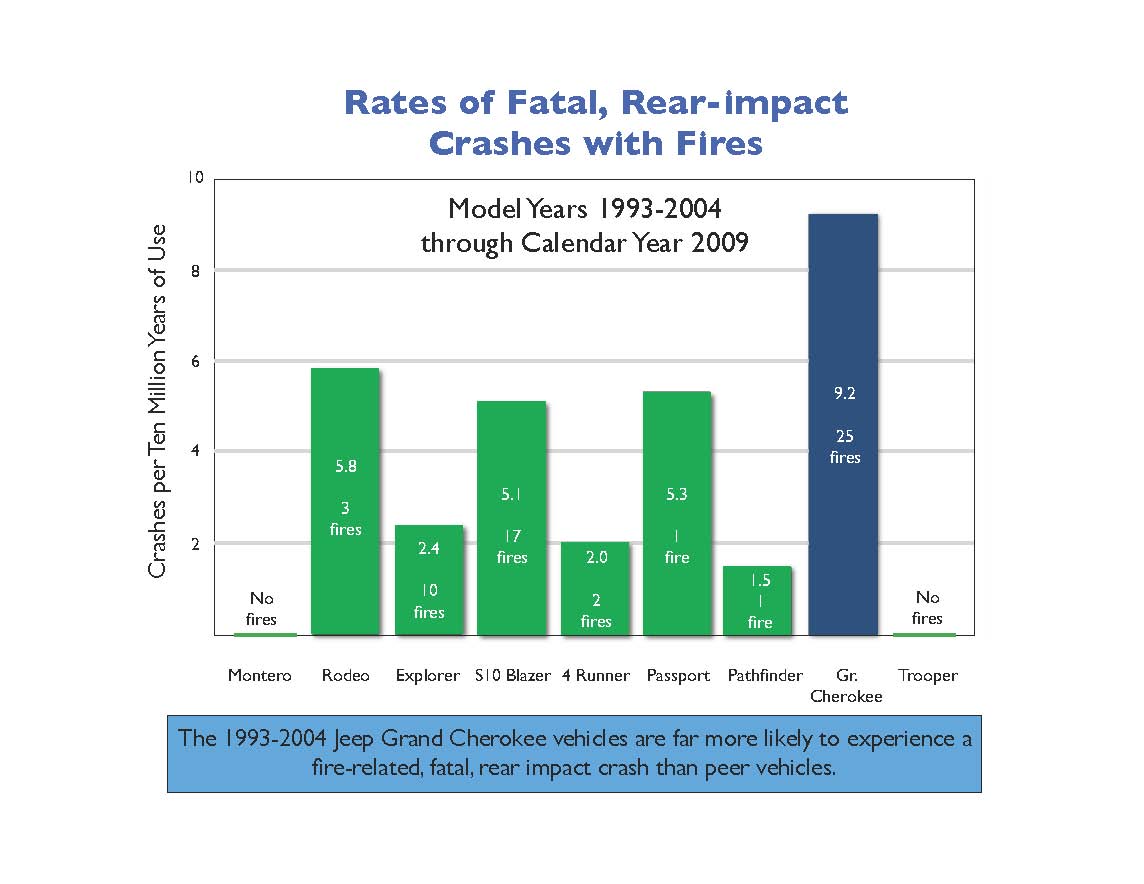 So despite the sage observations offered by auto, non-mathy persons for public consumption  NHTSA and Chrysler got their numbers, if not their viewpoints aligned.