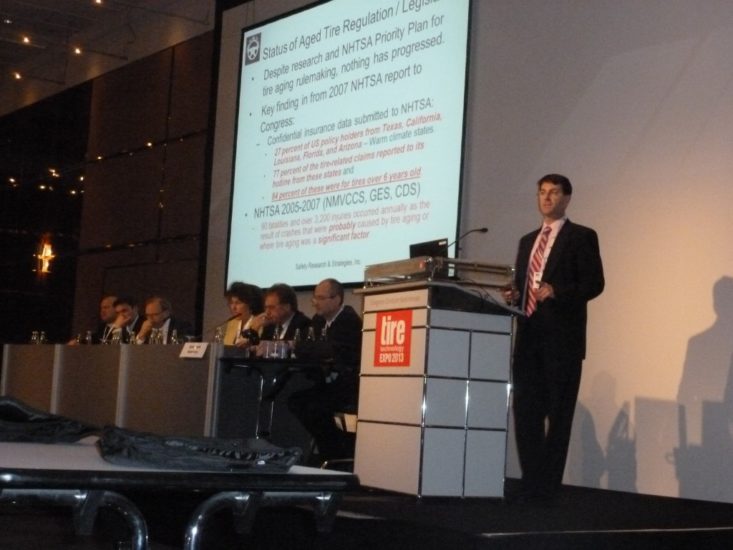 The issue that took center stage more than a decade ago, in the wake of the Ford Firestone rollover scandal. The deadly Firestone tires at the center of the controversy met the federal safety standards but nonetheless were de-treading at high rates after several years in service.  In 2001, Congress suggested that the agency consider the feasibility of a tire aging test, and the agency and Ford embarked on a series of experiments to create an artificial oven-aging test for tires. In 2005, the Safe, Accountable, Flexible, Efficient Transportation Equity Act: A Legacy for Users directed the Secretary of Transportation document NHTSA’s progress on tire aging research, and its findings and recommendations. The agency’s 2007 report to Congress did not make any policy recommendations, but did allow that it was “evaluating the feasibility of a regulation related to tire aging by analyzing the safety problem (tire aging as a significant causal factor in crashes) and potential benefits and costs of a requirement for minimum performance based on an aging method.”

Six years later, no policy and the tire aging docket NHTSA opened in 2005 is officially closed for comments. But the agency (and Safety Research & Strategies — see SRS Tire Safety) continues to file the results of its tire age research periodically. (The most recent agency submission was in July 2012, a report entitled: “Tire Aging Testing Phase 5.”) Could NHTSA’s Dr. Merisol Medri’s SAE presentation herald the arrival of a rulemaking? Her Powerpoint was not released, (click here for a copy) but our ears perked up at this slide:

“Based on analysis of data from 2005-2007 including databases (NMVCCS, GES, CDS), 90 fatalities and over 3,200 injuries occurred annually as the result of crashes that were probably caused by tire aging or where tire aging was a significant factor.”

This statistic stands out against the agency’s numerical analysis offered in the 2007 Research Report to Congress on Tire Aging: “From 1994 to 2004, NHTSA estimates that about 400 fatalities, annually, may be attributed to tire failures of all types.”

Doing the rough math — does this mean that about quarter of the annual tire-related fatalities are due to tire age? And, how did NHTSA arrive at that figure? Tire Identification Numbers (TIN) – the only way to discern a tire’s age – are not available in the public version of some of those datasets. (We are aware that NHTSA has begun to collect TINs for some sub-sets of crash data.) According to Medri the agency will be publishing a more detailed account of its research in a new report that will be published in the tire aging docket, at some unspecified time.

The SAE did Tweet a couple of supporting factoids about Medri’s presentation:

Meanwhile, SRS president and founder Sean Kane was presenting on tire age and other tire safety issues in the U.S. at the Tire Technology Expo in Cologne, Germany last week. Kane noted that tire death and injury claims from the start of Early Warning Reports in 2003 have taken a sizable drop. But EWR data only apply to tires less than five years old, so EWR doesn’t capture the aged tire data.  The drop in EWR tire claims is likely due in a large part to the upgraded tire performance standards that were required with the passage of the TREAD Act.

That’s mostly good news for motorists. But the result of making tires more robust is that tire failures occur later in the tire life.

“Fortunately, more tires will be worn out after five years but, as we have continued to document in our submissions to NHTSA during the last decade, tires with usable tread often end up on vehicles regardless of their age” Kane said.  “That’s why the tire age needs to be addressed with better policy.  While the industry has settled in on practices that urge motorists to replace tires after 6 years, regardless of tread, this message is not finding its way into practice and many service shops are still ignorant about the hazards of tire age, particularly in warm climates.”

NHTSA’s 2007 report noted that confidential insurance data submitted to the agency showed that 77 percent of the tire-related claims to its hotline came from 27 percent of its policyholders in five warm-climate states – 84 percent of those tires were more than six years old.  SRS’s own litigation survey found nearly 252 cases describing crashes in which tires older than six years experienced tread/belt separations – most resulting in loss-of-control crashes, 233 fatalities and 300 injuries. At least 63 cases involve spare tires and at least 21 cases involve used tires, which is likely an undercount.

Kane’s message to the tire company representatives at the Expo was cautionary: Take a more active role in eliminating the used and aged tire hazard or pay the price.  Tire and vehicle manufacturers have already agreed that tire age is a safety matter and that far too many hazardous used tires are culled from scrap heaps and resold to unsuspecting buyers. But industry has done little to protect itself – and more importantly, their customers.

Kane pointed to a 2008 Goodyear Tire proposal that would ensure the destruction of tires removed from customer vehicles in their retail stores:

“This shift in focus for tire disposal is in response to a growing concern that “used” tires are becoming an unsafe alternative for consumers to cut costs.  Currently 8-20% of Goodyear scrap tires that are disposed of at Goodyear locations find their way to a tire re-seller and this is a way for waste management companies to generate revenue to offset rising operating costs.  Although re-sellers can provide a warranty for these used tires, Goodyear takes responsibility to properly dispose of these scrap tires to insure the public’s safety.”

Goodyear has not yet acted on this proposal.

During a panel discussion at Tire Technology, industry representatives grumbled about tires as a “grudge purchase.” Kane responded that tire makers need to demonstrate to consumers that their products are not commodities distinguishable only by price. They needed to provide individual identification on their products, track them through the life cycle and ensure they are removed completely from service when are they are no longer safe for use.  An ancillary benefit to individual ID is the ability to easily discover whether a tire is recalled or not, which is currently in not possible.

“How can you expect your customers to understand and value your product if you can’t even tell whether a tire has been recalled or not at the service level?  What other product that is so directly related to customer safety is like that?” he asked.

In other tire news, the Tire Industry Association and the Rubber Manufacturers Association – together again! — and pushing a bill in the Maryland legislature that prohibits auto and tire repair shops from fixing tires unless they demount them from the rim and inspect the tires’ interiors and exteriors. It also bars garages from repairing punctures or cuts in the tread area with a patch and rubber stem or combination repair unit, and makes it illegal to repair a tire with less than 2/32-inch tread depth, a sidewall puncture or cut, and a host of other RMA and TIA approved failures.

The fiscal and policy note attached to HB 122 concluded that a law would add major expenditures to tire shop budgets:

The two trade groups, which co-wrote the measure, have characterized it as “a model tire bill.”

The Maryland House of Delegates, readers may recall, is the historic battleground where, last year, the TIA and the RMA were leading a charge against another model tire bill relating to tire age.

HB 729, Consumer Protection – Tire Age – Required Notice, would have required tire sellers and distributors to place a label on the tire displaying the month and year in which the tire was manufactured and a statement about tire age and tire deterioration. The tire seller would also have had to put the tire’s age on the receipt and have the customer sign a written disclosure about tire age. The retailer would have had to give the customer a copy of the disclosure and retain a copy of it for an unspecified amount to time

The TIA rallied its membership to oppose the bill by warning of meddlesome bureaucrats:

“This is the most important expenditure of time this year in protecting your business from government intrusion,” the TIA said. (Emphasis ours.)

Apparently, government intrusion that significantly raises the cost of doing business is just fine, if the TIA and the RMA are behind the curtain, pulling all the levers.

The tire repair bill is still in the hands of the Maryland House Committee on Economic Matters. Benjamin Kramer, the Maryland delegate who sponsored the tire aging has re-submitted it, and it is scheduled for a hearing next month.

So, the debate will begin anew, because one man’s government intrusion in another man’s model tire bill.

Editor’s Note: The original version of this article, posted on February 14, 2013, mis-attributed some tweets to Marisol Medri. The SAE authored those tweets about her presentation. The Safety Record Blog regrets the error.