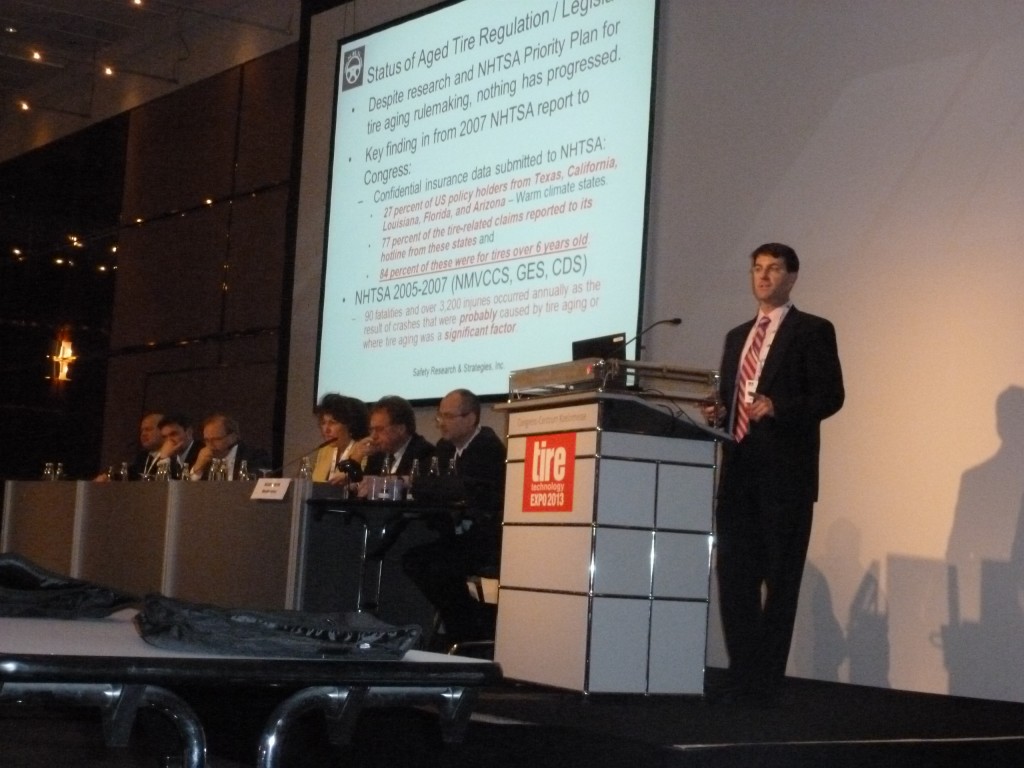 The issue that took center stage more than a decade ago, in the wake of the Ford Firestone rollover scandal. The deadly Firestone tires at the center of the controversy met the federal safety standards but nonetheless were de-treading at high rates after several years in service.  In 2001, Congress suggested that the agency consider the feasibility of a tire aging test, and the agency and Ford embarked on a series of experiments to create an artificial oven-aging test for tires. In 2005, the Safe, Accountable, Flexible, Efficient Transportation Equity Act: A Legacy for Users directed the Secretary of Transportation document NHTSA’s progress on tire aging research, and its findings and recommendations. The agency’s 2007 report to Congress did not make any policy recommendations, but did allow that it was “evaluating the feasibility of a regulation related to tire aging by analyzing the safety problem (tire aging as a significant causal factor in crashes) and potential benefits and costs of a requirement for minimum performance based on an aging method.”

Six years later, no policy and the tire aging docket NHTSA opened in 2005 is officially closed for comments. But the agency (and Safety Research & Strategies — see SRS Tire Safety) continues to file the results of its tire age research periodically. (The most recent agency submission was in July 2012, a report entitled: “Tire Aging Testing Phase 5.”) Could NHTSA’s Dr. Merisol Medri’s SAE presentation herald the arrival of a rulemaking? Her Powerpoint was not released, (click here for a copy) but our ears perked up at this slide:

“Based on analysis of data from 2005-2007 including databases (NMVCCS, GES, CDS), 90 fatalities and over 3,200 injuries occurred annually as the result of crashes that were probably caused by tire aging or where tire aging was a significant factor.”

This statistic stands out against the agency’s numerical analysis offered in the 2007 Research Report to Congress on Tire Aging: “From 1994 to 2004, NHTSA estimates that about 400 fatalities, annually, may be attributed to tire failures of all types.”

Doing the rough math — does this mean that about quarter of the annual tire-related fatalities are due to tire age? And, how did NHTSA arrive at that figure? Tire Identification Numbers (TIN) – the only way to discern a tire’s age – are not available in the public version of some of those datasets. (We are aware that NHTSA has begun to collect TINs for some sub-sets of crash data.) According to Medri the agency will be publishing a more detailed account of its research in a new report that will be published in the tire aging docket, at some unspecified time. END_OF_DOCUMENT_TOKEN_TO_BE_REPLACED