Last Friday, David Shepardson of the Detroit News announced for NHTSA what many knew was coming: the 1993-2004 Grand Cherokee and 2002 – 2007 Jeep Liberty rear-impact fuel-fed fires investigation is over. No recall. The ornamental trailer hitch will stand as a symbolic gesture of a remedy.

This one has all the hallmarks of what has become an Office of Defects Investigation classic: design defect too difficult/costly to correct? Check. Bogus, untested remedy? Check. Appearance of action? Check.

You could tell that NHTSA was real proud of its work by the timing of the disclosure: 5 p.m. on a Friday before a holiday weekend. Classic public relations bury-the-news-and-hope-nobody-notices move. Release the information, and head home for the holidays. Classic and classy!

“Words cannot describe how disappointed I am in NHTSA and US DOT in general,” says Jenelle Embrey, the fiery Linden, Virginia woman who teamed up with the Center for Auto Safety to advocate for a recall on the older model Jeeps with the fuel tank aft of the rear axle design. Embrey launched her own crusade after witnessing the deaths of 18-year-old Acoye Breckenridge and the driver Heather Lee Santor in an October 2012 crash. Embrey’s dad, Harry Hamilton, managed to save one occupant of Jeep Grand Cherokee before it exploded. END_OF_DOCUMENT_TOKEN_TO_BE_REPLACED

T-Minus three and counting before the rollercoaster ride that is the tenure of Department of Transportation Secretary Ray LaHood careens to a stop. But, not before he did one last handstand for the crowd.

With the National Highway Traffic Safety Administration and Chrysler on a collision course over a recall to remedy the aft-of-the axle fuel tank design of the early model Jeep Grand Cherokees and some Jeep Liberty SUVs that is prone to explode into flames in a rear impact, LaHood, donned his super-hero tights and flew to what he imagined to be the rescue.

Now, most backroom deals attempt to stay on the QT. But, Ray LaHood, never one to miss an opportunity to pat himself on the back, could not be silent. He gave David Shepardson of The Detroit News the scoop: Six days before Chrysler would have to formally respond to NHTSA’s request that Chrysler recall 2.7 million 1994-2004 Jeep Grand Cherokees and 2002-2007 Jeep Liberty SUVs, Ray got Chrysler Group CEO Sergio Marchionne on the blower and said something like, “Look here, old man, no one takes safety more seriously than Ray LaHood and we’ve got to figure this Jeep thing out!”

Chrysler had heretofore demonstrated a very public unwillingness to recall those Jeep models, based on a shaky statistical analysis that threw every model on the wall it could think of to make the pre-2005 Jeep Grand Cherokee (before they moved the tank) look not-so-horrible. On June 9, LaHood drove from his home in Peoria, Ill; Marchionne flew in from Italy and David Strickland, ever playing Jimmy Olsen to LaHood’s Superman, flew from D.C. to Chicago. The trio converged at the Federal Aviation Administration building at O’Hare Airport for a “tough, hour-long ‘frank’ meeting,” according to Shepardson’s story.

As reported by Shepardson, Marchionne dispatched some engineers the next day to D.C. to come up with “the outlines” of a remedy with NHTSA. In public, the confrontation appeared to build, encouraged by business and auto journalists who seemed excited by the prospect of Chrysler sticking its finger in the government’s eye. Just as the showdown drew nigh, the automaker announced that it would implement a “voluntary campaign” to add trailer hitches to some older models.

Ray could not contain his enthusiasm for the remedy: END_OF_DOCUMENT_TOKEN_TO_BE_REPLACED 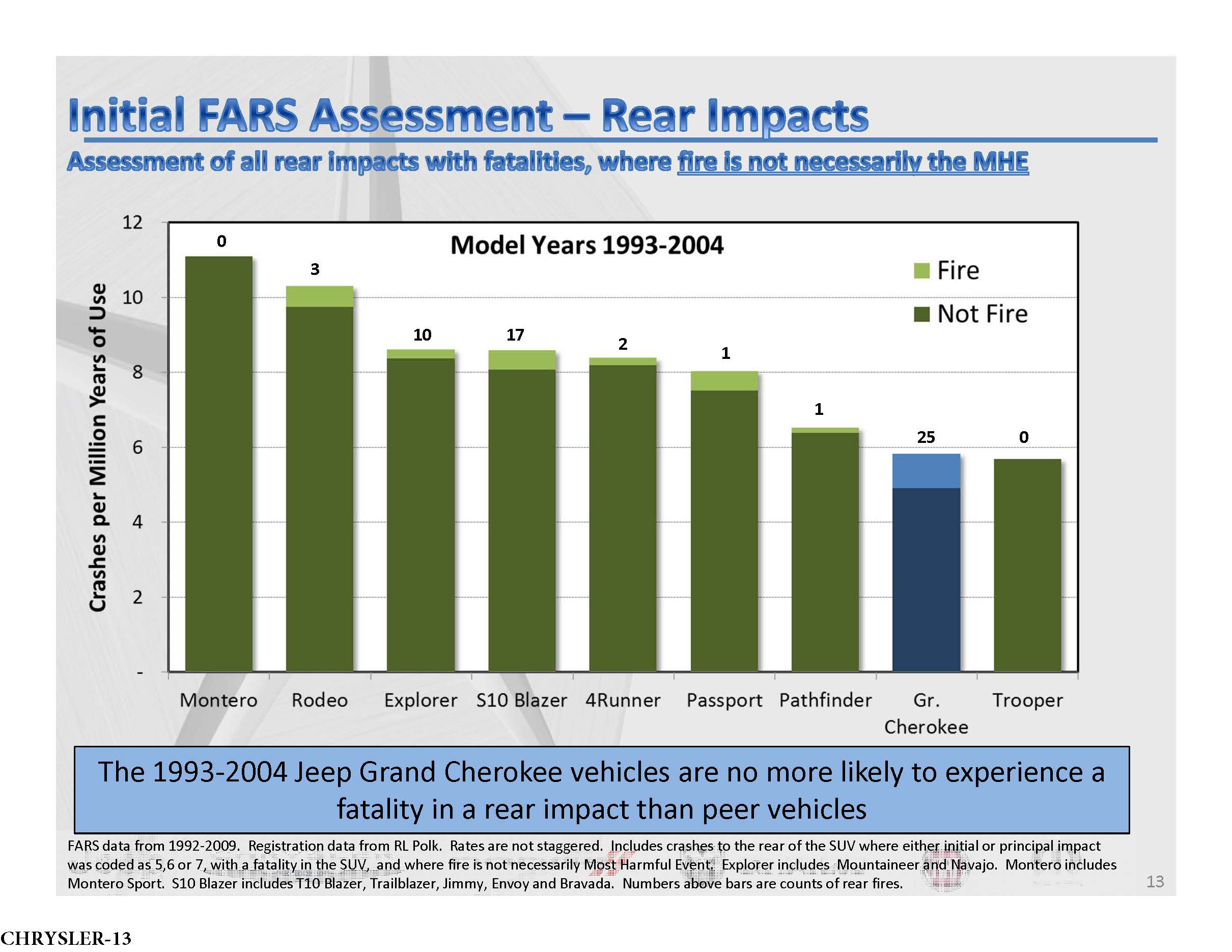 We will not speculate. We have, however, hired Randy Whitfield of Quality Control Systems Corporation to see if he could replicate Chrysler’s first – and less favorable, albeit more accurate – method of comparison of fire-related, fatal rear-impact crashes.   END_OF_DOCUMENT_TOKEN_TO_BE_REPLACED

So Chrysler has thrown down the gauntlet, and its claque has dutifully delivered its standing O. Atta boy, Chrysler, tell those regulators to stick it!

As usual, those opining about Chrysler’s public resistance to recalling the 1993 – 2004 Jeep Grand Cherokees and 2002 -2007 Libertys for defective fuel tanks haven’t a bloody clue. And so, as usual, The Safety Record Blog will put Chrysler’s shot across the bow into its proper context.

To recap: In November 2009, the Center for Auto Safety petitioned the National Highway Traffic Safety Administration to open an investigation into fuel-fed fires plaguing the early model Jeep Grand Cherokees, alleging that the plastic fuel tank’s placement behind the rear axle and below the rear bumper, and the lack of adequate shielding made it more vulnerable to rupture or leakage from rear-impacts and in rollovers. According to Fatality Analysis Reporting System (FARS) data, this design resulted in 172 fatal fire crashes with 254 fatalities, CAS said. The agency granted the CAS petition in August 2010, and opened a Preliminary Evaluation. In June 2012, ODI bumped up the investigation to an Engineering Analysis. Two weeks ago, NHTSA announced that it had requested that Chrysler recall the 1993-2004 Jeep Grand Cherokee and 2002 -2007 Liberty and was ready to go to an Initial Decision hearing if Chrysler refused.

So far, Chrysler has refused. Its preliminary defense was laid out in a “White Paper” (see NHTSA Drops Hammer on Chrysler Jeeps) Yes, it was written on virtual white paper. But we expected something a little more detailed than a three-page press release and a chart with writing so tiny, one needs to blow it up 500 percent to read it. Its basic argument is, and has always been, this: The Jeep Grand Cherokee and the Jeep Liberty met the Federal Motor Vehicle Safety Standard (FMVSS) 301 fuel tank integrity at the time, and the Jeep Grand Cherokee and Liberty, statistically are not outliers for rear-impact fuel-fed fires. (Chrysler has until next Tuesday to file its official response.)

How much is your conscience worth? Jenelle Embrey figures it at about $2,000 a month. That is roughly her monthly out-of-pocket cost for three billboards in the Frederick County, Virginia area, depicting a Jeep Grand Cherokee engulfed by flames and the plea: “Help Save Innocent Families Change.org/Dangerous Jeeps.”

The Linden, Virginia woman, who works as a medical transcriptionist and a bookkeeper, is hoping that the graphic depictions will drive motorists to sign her online petition at change.org demanding that Chrysler recall the 1993 -2004 Jeep Grand Cherokees to correct a design that sites the plastic gas tank behind the rear axle, where it is vulnerable to fuel fires in rear-impact crashes. As of this morning, she had collected nearly 3,355 signatures.

“I worked five years at my part time job, and I was at the point where I thought:  ‘It’s time to let go of the second job.’ Then the accident happened, and I said: ‘I’m going to hold on to it to fund my Jeep campaign,’” Embrey says. “It’s insane that they are still on the road. [Chrysler] knows they are faulty.”

The Jeep Grand Cherokees have been under the scrutiny of the National Highway Traffic Safety Administration since November 2009, when the Center for Auto Safety petitioned the agency to open an investigation into fuel-fed fires in Jeep Grand Cherokees from the 1992-2008 model years. The advocacy group charged that the plastic fuel tank’s placement behind the rear axle and below the rear bumper, and the lack of adequate shielding – similar in design to the infamous Ford Pinto – made it more vulnerable to rupture or leakage from rear-impacts and in rollovers. According to Fatality Analysis Reporting System (FARS) data, this design resulted in 172 fatal fire crashes with 254 fatalities, CAS said. The agency granted the CAS petition in August 2010, and opened a Preliminary Evaluation. In June 2012, ODI bumped up the investigation to an Engineering Analysis; it remains open.

Today, the Center for Auto Safety sent another letter to Chrysler Chairman Sergio Marchionne and John Elkann, Chairman of parent company, Fiat Spa, calling on the company to recall the 1993-2004 Jeep Grand Cherokees, 1993-2001 Jeep Cherokees and 2002-2007 Jeep Libertys. The letter was an emotional appeal, featuring the photos of toddlers and small children, who are among the occupants who have died in rear impact fire-involved crashes.  CAS cited 349 fatal fire crashes of 1993-2004 Jeep Grand Cherokees, 1993-2001 Jeep Cherokees and 2002-2007 Jeep Libertys that have resulted in 478 deaths, at least 157 of which are deaths due to fire. END_OF_DOCUMENT_TOKEN_TO_BE_REPLACED